Billions of neurons linked by trillions of connections create one of the most complex structures on this planet – our brains. But we had no idea how the brain really worked until relatively recently.  Scientists began understanding the role of the different parts of the brain by studying people with brain damage. Localised damage results in highly specific impairments in certain skills, that many of us take for granted. This suggested that brains are modular – this means that different parts of the brain are responsible for different functions.

More recently advanced imaging techniques enable researchers to look into healthy brains as volunteers carry out different tasks like meditation or yoga for example. This has helped us create  a map of our brains that shows what the different parts of our brains do.

The human brain can be divided into 3 main areas – the forebrain, midbrain and hindbrain. 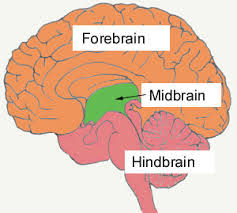 Also known as the mammalian brain as it evolved rapidly with our mammalian ancestor. Many of our uniquely human capabilities arise in this part of the brain.

The forebrain includes the following parts:

Directs sensory information to the cerebral cortex for higher processing.

Releases hormones into the bloodstream for release to the rest of the body.

Aides in the formation of spatial memories – memories in time and space.

One of the most recently evolved parts of the human brain regulates the speed and smoothness of intentional movement initiated by the cerebral cortex. This part of the brain is modulated by the neurotransmitter, dopamine. A deficiency in dopamine is associated with the symptoms of Parkinson’s disease – such as slowness of movement, tremor and impaired balance.

This is the outer most part of the brain which is believed to be the area that makes us human. In this area plans are made, words formed, and ideas generated. This area is home to creative intelligence, imagination and consciousness. It is the area where the human mind is formed.

Structurally the cortex is a  single sheet of tissue folded up to fit inside the skull. If the cortex as spread flat, it would spread over 1.6 square miles. It is made up of a million neurons but has about 10 billion inter connections. The cortex therefore spends most of the time talking to itself. In each of the brains hemispheres the cortex has 4 principal lobes.

Houses the neural circuits for thinking, planning and is the home of where our individualism or personality.

Involved in attention and the integration of sensory information.

The Body is Mapped onto the Brain

The entire body is mapped onto the cortex of the brain for processing both sensory and (motor) movement of each body area. However, the proportions of the cortex devoted to different parts of the body differ. There is more brain space devoted to the hands and lips than to the torso or legs. 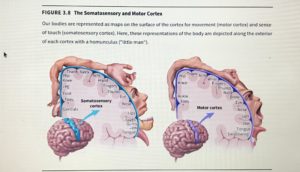 The two cerebral hemispheres are connected by a tract of about a million axons called the corpus callosum. A procedure performed to alleviate epileptic seizures involves cutting this tract, thus separating the two hemispheres. This can result in the split of the sense of self. To the person who has had this procedure done, it feels as if the body is controlled by two independent brains.

THE MIDBRAIN – The Limbic Brain

The midbrain plays a role in our physical actions. One of its central structures is the substantial nigra – which is a rich source of the neurotransmitter dopamine – which enables smooth movement. Dopamine is also the reward neurotransmitter and is responsible for learning, compulsive behaviour and addiction. The midbrain is also involved with sound and visual information processing, control of eye movement and regulation of mood. 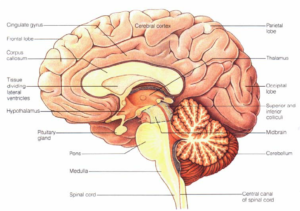 THE HINDBRAIN – The Reptilian Brain

The hindbrain is located at the base of the skull, just above the neck. It is suggested that this is the first part of the brain to evolve. The hindbrain is made up of 3 parts – the medulla oblongata, the pons and cerebellum.

Responsible for many of the automatic behaviours that keep us alive – such as breathing, regulating heart rate and swallowing. The axons of the medulla oblongata cross from one side of the brain to the other as they descend to the spinal cord. This explains why each side of the brain controls the opposite side of the body.

Also controls vital functions such as breath, heart rate, blood pressure and sleep. It also controls facial expression and the movement and orientation of the body in space.

The most prominent part of the hindbrain. It controls the position and movement of the body and can encode and memorise the information needed to carry out complex fine motor skills and movements.

Yoga and the Brain

Now when you understand the brain, you understand how the science of yoga developed to train the brain and body from bottom-up. The yama and niyamas are ethical guidelines to live a good life and make the practice of Yoga easier. The actual practice of Yoga begins with asana – physical posture. Physical posture is governed and controlled by the oldest part of the brain the cerebellum. Asana trains the cerebellum.

We then move onto pranayama. In learning how to use breath as we move, we start to train the Pons and as this happens we become more aware of our breath and heart rate. When we learn higher pranayama’s like alternative nostril breathing, we begin to work with the medulla oblongata. This helps us learn to regulate breathing and control heart rate – so we can reduce stress in the body. This control also enables us to use our bodies to perform optimally when we need to. Note the cross-over in the medulla oblongata – hence the left nostril breathing has an effect on right side of brain and vice versa.

And once we can control breath, muscle and heart we can learn to reduce stimuli from the outside and focus our awareness inwards. This is the practice of pratyahara – inner awareness. Pratyahara is the same as interoceptive awareness. Pratyahara practice is designed to train the midbrain and the communication bridge between both hemispheres – the corpus callosum. It is here that our sense of self comes together. By learning how to bring balance in the corpus callosum and midbrain we stabilise our moods, learn how to look at the whole picture. We also learn how to break visual and auditory stimuli down into its parts by controlling eye movement and sound processing. Pratyahara practice also has its effects on the occipital and temporal lobes. It enables us to train our bodies to discern between the different sources of stimuli.

And once we are established in Pratyahara, we begin our practice of dharana – focused attention. By engaging the crown of the head as we sit or stand in any yoga posture, we begin to train the parietal lobe – the part of the cortex that controls attention and sensory integration. We teach ourselves how to direct attention. We learn how to focus on what’s important at any given moment.

And when we learn how to focus attention, we then move on the practice of Dhyana. Dharana is about sustained attention or focusing attention for long periods of time. This is concentration. A popular Buddhist saying is “The mind is where attention is”. In learning how to concentrate – we learn to control the mind.